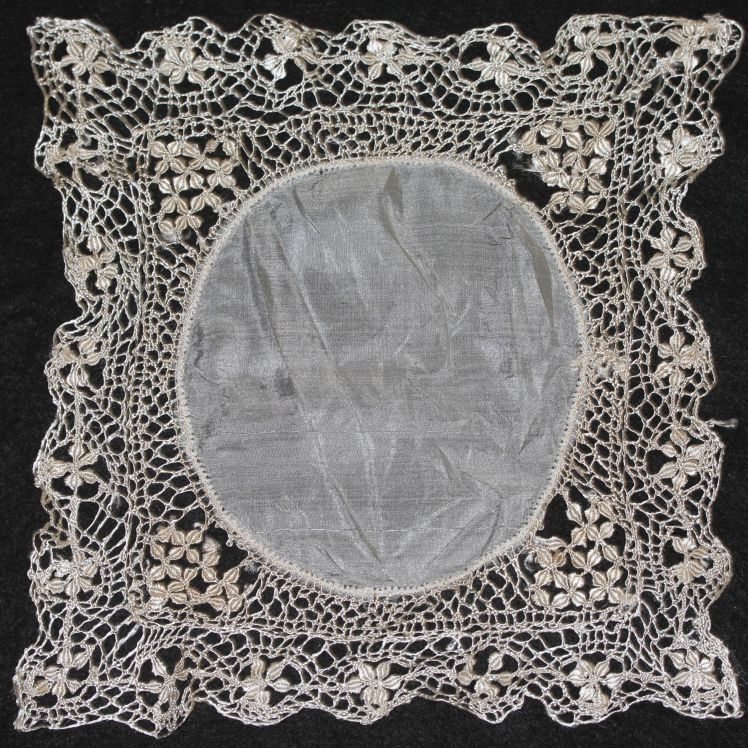 Materials
The centre of the handkerchief is a lightweight cream/white coloured habutai-like silk. It has slight slubbing. One direction of the weave is more pronounced than the other. Microscopic examination:

The threads of the knitted/crocheted lace edge are shiny and cream coloured. Each thread is made of many individual fibres.

A little more work is required to determine the fibre used in the crocheted edge. Given the age of the item (most likely c. 1923), synthetic materials, other than rayon, could be ruled out. Rayon was available in the early 1920s. It was first commercially produced by the American Viscose Company in 1910 (Myers-Breeze and Kehoe, 2013).

Was the fibre silk, rayon or mercerised/glazed cotton? This can be determined by microscopic or chemical testing. I had access to a 200x microscope, which ruled out the presence of cotton: 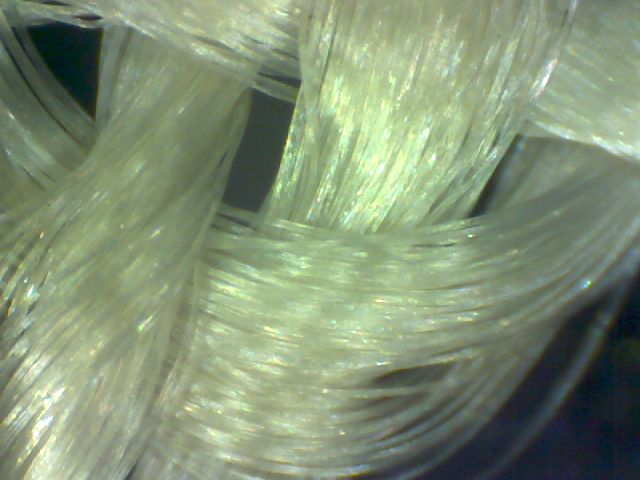 At this magnification, striations in the material (that would indicate rayon) are visible, but not well enough to leave no doubt. Further investigation with a burn test showed that the lace fibre burned completely away, even when the flame was removed, leaving very little ash, indicating the fibre is rayon (Willard).

A textile such as this is best cared for by storing flat and loosely layering (to allow air circulation) with archival quality acid-free glassine or tissue in an acid-free archive box (Baker, 2008). Store in a cool, dark environment, as both heat and light degrade silk (Vilaplana, 2017). The rayon component will be protected by this storage method also.

Vilaplana (2017) shows that relative humidity has little impact on the aging of silk, which is a relief, since the item came from a very dry part of Queensland, and is now being stored in the tropics.

I will be storing this item with silverfish baits as well, as this is a specific problem I have identified with other items in the house. However, the storage boxes for this item do not show the presence of silverfish. This is likely due to remnants of insecticide distributed on the items by Dorothy (probably DDT!).

Production Method
The centre of the handkerchief is commercially woven.

The edging is bobbin lace. “Bobbin lace is woven over a pattern on a firm pillow, with threads wound on bobbins” (Sherpard, 2003, p. 10). It appears to have been made in two pieces, then the outer edge added to the inner edge with whip stitch. 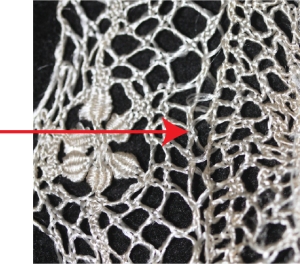 The inner piece shows a vertical join on one edge, which is slip stitched together, showing that it was made in one length, then joined. There is a similar join on the outer section, executed more seamlessly, creating a mitre in one corner.

It is difficult to know whether the lace is hand-made, or machine made. Hand-made handkerchiefs and handkerchief edgings were available for purchase at the time, and Dorothy had regular access to Sydney, where most goods would have been available.

However, “by the early 20th century, machine-made copies were being made that were almost indistinguishable from the hand-made lace” (Earnshaw, 1999, p.171).

Dorothy, her sisters and mother were all extremely competent sewers (there are many hand-made gifts in Dorothy’s collection, attributed to her sisters and mother), so it is highly probable that it was made by Dorothy or a family member, but this cannot be said with certainty. Patterns for bobbin lace and point lace were widely available in in the 1920s, in magazines like Modern Priscilla (The Priscilla Company, 1920).

The lace edge is attached to the silk with a small machine zig-zag, and the unfinished edge of the silk cut back to within a few millimetres of the stitching.

There is no further finishing on the fabrics, such as starch.

Origin
There are a no labels present on the article.

Although there were several attempts to establish a silk industry in Australia prior to 1893 (Ferreira, 2011), there was no major manufacture of silk in Australia in c. 1920; therefore, the materials used in this item are almost certainly imported.

Silk was imported from Japan, as well as France and Switzerland in 1923 (Wickens, 1923), and “in the second decade of the 20th century, apparel and textiles (largely silk at this stage) overtook tea and rice as Australia’s primary imports from China” (Wilson et al, 2012).

During the early 1920s, skirt length rose to reveal the ankles and by 1926, the knees (Forster, 1959, p. 207) which increased the demand for rayon for stockings (Dorothy has a lower-calf length dress in her wedding dress in 1923). However, Rayon was not manufactured in Australia until 1929. Prior to this, rayon was manufactured in the United States (United States Senate, 1942, p. 1151, Exhibit 24F) and England (Myers Breeze, 2013); so, the fibre for the rayon lace probably has this provenance.

Problems
The question of whether the piece was hand-made by Dorothy or her family could be resolved if I were able to find the pattern. Her patterns have not survived. Internet searches for antique bobbin lace patterns in publications has yet to reveal this information.

Further information could be available at Sydney’s Powerhouse Museum which houses a large textiles collection. Perhaps they have a similar item with more provenance? This highlights the importance of traceability for textiles for providing more definitive identification, and yet such information is unlikely to ever be available.

Nostalgia
This handkerchief is a decorative, rather than practical piece. It is certainly not for nose-wiping!

I deliberately chose this item from my collection of Dorothy’s items because I thought it might be the type of handkerchief one would carry on one’s wedding day. Since I had the wedding photos of Dorothy and George, this piece seemed to fit. I’d like to believe it was made by Dorothy, or one of her close relatives, specifically for the occasion. Thus, I have used c.1923 as the date of the item.

I’m sure this piece of story-making is part of my desire to assign some significance to the handkerchief and make a link to the past.

Visual Examination
Such a decorative item would not have been heavily used, perhaps only on special occasions, or conceivably once, on Dorothy’s wedding day.

Only one of the four rayon threads connecting the inner edge of the lace to the silk is still in tact. Given the handkerchief’s probable lack of use, this demonstrates its fragility. Neal et al (2004, p. 225) state that rayon is weaker than silk, cotton and linen.

Additionally, the silk shows small ‘pulls’, and micro-tears where it is machine-sewn to the lace. Vilaplana (2017) found that silk loses tensile strength with age, due to both physical and chemical breakdown: “the brittleness of the historic silk fibres [is] caused by combined physical (e.g. chain reorganisation) and chemical (e.g. chain scission and oxidation reactions) structural effects during their natural ageing”.

It is not known whether the observed damage occurred during use, or at a later date.

There is a mis-match of the colour of the lace to the silk fabric. Since the piece is probably hand-made, this could be that these were the only materials available. There is also a slight difference in the shade of cream between the inner section of the lace and the outer. There do not appear to be stains on the item. One would expect that age related fading would be uniform, so perhaps this colour difference is due to two different batches of thread being used, and perhaps even that the two section of the item were made at different times.

It could also be discolouration with age, but this is unlikely as the handkerchief has probably not been exposed to excessive light: it would have been stored at the back of a drawer during its early days, and it was wrapped and well secured from daylight when it was found in the trunk. Yellowing occurs in silk, mainly due to heat and light (Vilaplana, 2017), and in rayon due to exposure to sunlight (Neal et al, 2014, p 226). Its location in Queensland means it has been exposed to 100 years of intense summer heat, yet it is the rayon which is discoloured.

Other Elements
The motifs are traditional, and chosen for their visual appeal rather than significance, as far as I can tell. This example shows similar motifs to the ones on the handkerchief: 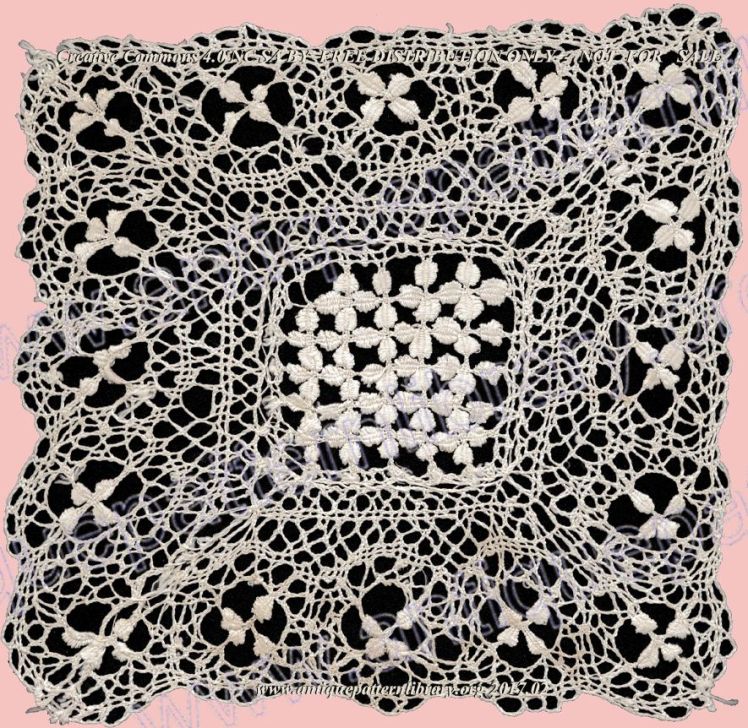 by Meredith Woolnough
(Read my Review) 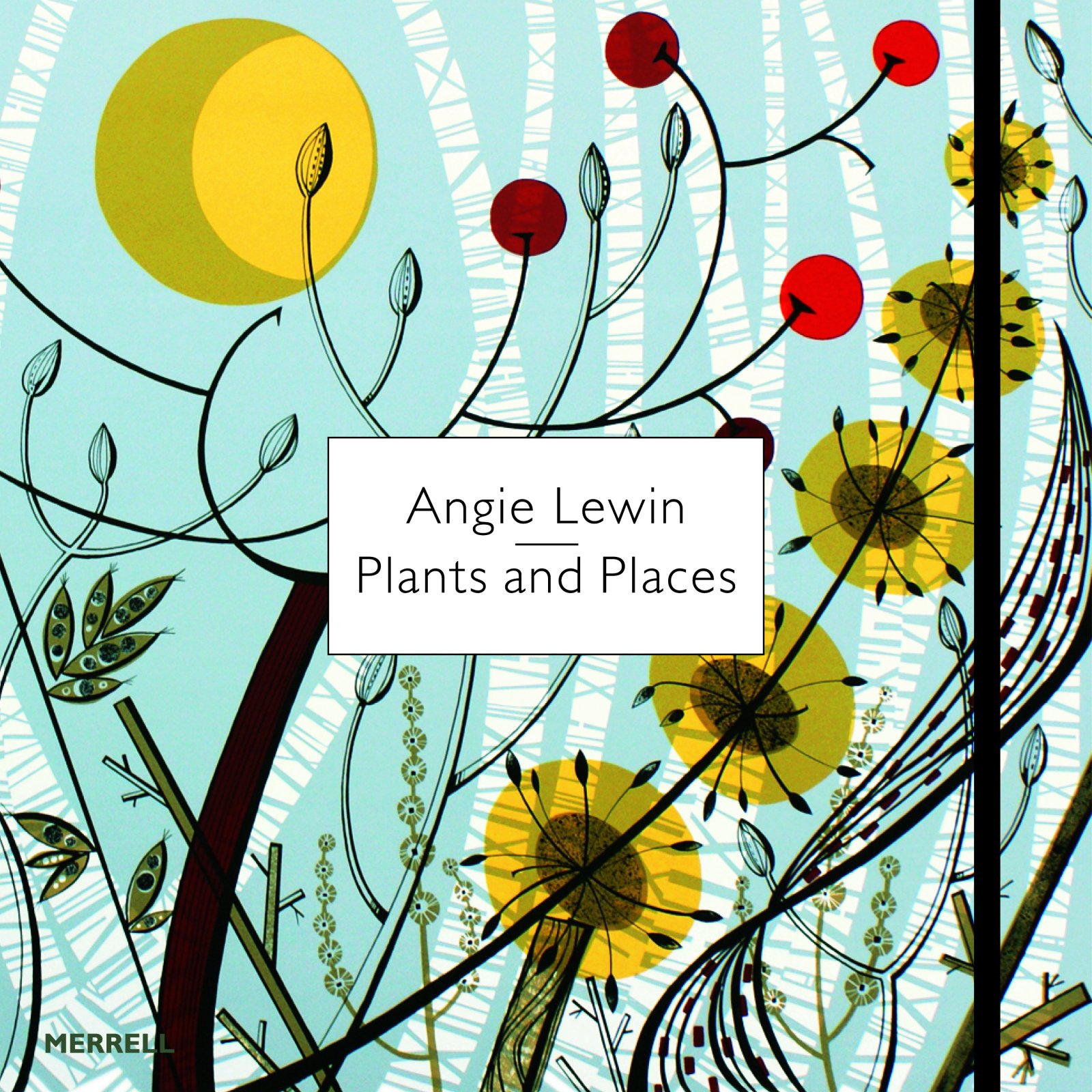